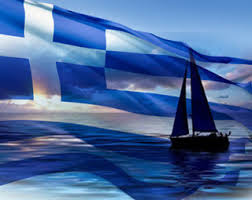 Tommy Lee’s message for Greece
“GREECE
Because we are a small, poor country full of people with big hearts
Because we never visit anyone empty-handed
Because there is no way to tell foreigners the word "Kapsoura" to properly (burning desire for someone)
Because there is still something valuable in Greek families
Because we always do, even if at the last moment
Because we were slaves for 400 years, but never take this as an excuse for our current state
Because we are scattered all over the Planet
Because we have the word "filotimo" (Honor for his friend?) In any other language
Because foreigners, if they can not find a word, use one of our
Because we share our problems and bad times with our friends and family and not with psychiatrists
Because Socrates, Plato and Aristotle were Greeks
Because we invented theater
Because we gave birth to democracy
Because we discovered logic
Because we made the start in the science
Because we are proud of our culture, not our war
Because when we started to make the Parthenon, the others still slept in trees
Because we have all these lights, which have made efforts to create peace through war
Because we see a difference between "eros" (in love) and "Agapi" (Love), while we feel both passionately
Because Eros was a Greek God
Because we gave the curse "Freedom or Death"
Because we already woven leash than any other are still attracted to wolf skin
Because "Greeks do not fight like heroes, but heroes fight like Greeks" (Winston Churchill, 1941)
Because we gave our ancient alphabet to the Romans and our Medieval alphabet to the Slavs
Because we are not ashamed to cry
Because we dance when we are sad
Because we work to live, not live to work
Because 97% of the star names are Greek
Because if we "brother" or "cousin" on the road every scream turns
Because our churches are not dark inside full of special lighting
Because our parents do not forget that we exist when we are already 18
Because if we want to get a sun tan, we go to the beach
Because we confront every difficulty with humor
Because the Olympics were born in Greece
As we unite with our Olympic light the world and send the message of peace
Because our sky is blue white
Because 40% of the Oxford dictionary consists of Greek words
Because we know what "Kefi" (joy in the fun?) Means and how to live it.
.....PROUD GREEK SOUL!”
Τhank you Tommy Lee for your message!
Georgia Markea
Αναρτήθηκε από Georgia G. Markea στις 5:06 μ.μ. Δεν υπάρχουν σχόλια:

I AM PROUD TO BE A GREEK (GEORGIA MARKEA)

Georgia G. Markea is a Doctor in Music Education (PhD, Piano Pedagogy) of the University of London (Institute of Education), where she studied under Professor Keith Swanwick with the aid of a grant from the Greek Government (IKY). At the Institute of Education she has also completed post-doctoral research in Talent in Piano Playing under the guidance of Professor Graham Welch. At the Institute of Education she has also completed post-doctoral research in Music Technology under the guidance of Professor Graham Welch. She is also a graduate of the Athens School of Philosophy and the Athens School of Social Sciences. She has a Piano Diploma and Degree (First Class) from the Athens Conservatory, where she studied under the guidance of Phoebe Vallinda and with the aid of a grant, and has done two years’ postgraduate studies in piano performance. She also has degrees in Higher Harmonic Theory, Counterpoint and Fugue. As a pianist she has taken part in concerts in Greece and abroad, which were followed by excellent reviews in well-known newspapers. She has served as a social worker from 1982-1984 and from 1988 has been permanently assigned to secondary education as a musician, specialising in the piano. She has worked as an ethnomusicologist for the Academy of Athens with significant work in the preservation of the Greek cultural heritage. She has given many presentations about Music Education and Piano Pedagogy at international conferences in Greece and abroad. Since the academic year 2003-2004 she has been teaching in the postgraduate department of teachers at the Marasleio College of Primary Education in Music Education seminars. She has also been teaching the newly-appointed teachers of music at the Regional Educational Centers. Since the academic year 2007-2008 she has been seconded as a School Advisor for Music Education in Athens. She has been the vice -president of the Union for
Primary Music Teachers (Ε.Ε.Μ.Α.Π.Ε.) from 2007 until 2009. She is a member of the Hellenic Union for Music Education (E.E.M.E.), which represents in Greece the International Society for Music Education (ISME). From 2002 until 2006 she has been head of the Piano Pedagogy Group. She is a founder member and in charge of the music department of the Artistic and Intellectual
Association of Egaleo, and also member of the Athens Institute for Education and Research (AT.IN.E.R.). She is an assessor for the Ministry of Labour with responsibility for the activities for human resources in the sphere of Culture, Sports and the Mass Media. Her oeuvre consists of ten books and dozens of articles in books and journals selected by critical committees.

She is married to Dimitrios Tilaveridis, who is also a School Advisor and she has a daughter named Katerina Verdi.